I came, I saw,I conquered, I went missing for 2 hours 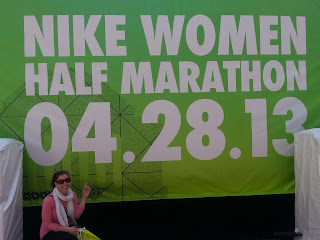 I know this is about 3 days late but hey, I'm a tired girl. As you read this I'm probably doped up recovering from my surgery. DC was a blast. I still can't express how grateful I am that Jen talked me into signing up for this half. It was an amazing experience, and yes, I've caught the fever. I'm ready to do it again (in like 6 months lol).

Where do I begin! The trip down was a lot of fun. We brought Julianne with us and arrived around 2. Me and Jen headed straight to the expo to grab our bibs and race gear. Holy long lines!


Although getting to the clerks to get our swag bags and bibs took 5 minutes, the line was backed up pretty far down just to get to the tent. Then comes the expotique. I rarely pull the "I'm so girly" card so I was a bit unimpressed with the hair and makeup stations. I LOVE Bare Minerals, just not at a pre-race event. Also, where were the lights? I'm pretty sure Nike can afford electricity. I thought the interactive "see if you won" thing was cool even though I got nada! 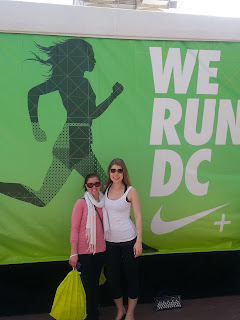 Overall the expo sucked in my personal opinion and that was not the venue for it. Oh, the official race shirts and such were not even there. We had to actually go to the Nike store up the road.

After this adventure we went to find our names in the Nike wall in Georgetown which was pretty cool. Unless I win the lotto that's never happening again. More carbs for lunch at this yummy pizza place that I forgot the name of! We got ready to head to our hotel, stopped at Nike on the way to the car so I could grab a shirt and head off. 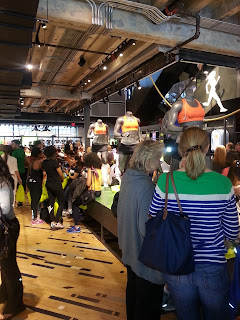 Obviously the first thing to do when you get to a hotel with beds that feel like pillows is to take a nap! And then go for a shakeout run. And boy do I have a great friend. After reminding her for the millionth time I had never been to DC she ran me to a garden to which I replied "oh this is cute." I was told it was more than cute and ta-da I got to see the White House. Of course this had to be the day when I wore my Kiss My Sass shirt. Sorry Obama! 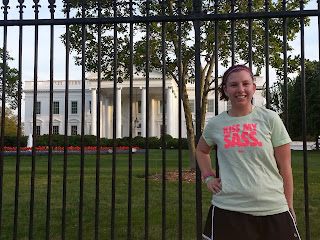 We took it easy in the evening- a light dinner, a shower, some foam rolling and apparently no sleep. I did not sleep well at all which is sad because I really liked the bed. 4:45 AM rolls around pretty quickly in case anyone was wondering. By 6 AM we were out the door and I learned how to use the DC metro (I don't like it). 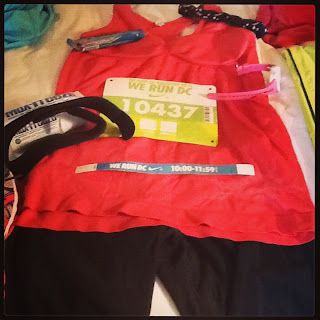 Made it to the race! I ran to bag check then I tried to get to my corral and ended up having to jump the fence. Really Nike? And I was in the back of my pace group and needed to be in the front. They pumped us up with some fab music and we were off. However they must have not gotten the memo about staggering the corrals in the start. Why are you walking, we haven't even gotten to mile .25? I ended up hopping on the side of the tunnel and grass for the better part of 3 miles since I could not escape walkers and slower runners. A little disappointing as I wasted a lot of energy.

Oh hey IT Band and only mile 5! Luckily I ignored the pain for a bit. The course was beautiful and there were spectators everywhere with signs, making it easy for me to focus on them instead. It was also VERY hot. I kind of ruined my goal of no walking around mile 9.5 because I was soo thirsty and dehydrated (even after the cliff chews and nuun) and I wanted to save my knee for the finish line. So I ended up run/walking the last 3.5 which sucked, but I got to run across that finish line! 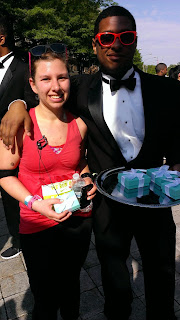 Oh and FYI Nike, i am insanely disappointed about the no photographer thing. That is the first and last time I will cross a finish line with a huge smile on my face, and you missed it.

The finishers area was very crowded and I wish they gave us bags before food. I was already carrying my necklace, a water bottle and stuff from my belt, where was I supposed to fit food? I skipped the expo and went to stretch. And then realized my phone was broken.

So here I am, little Lynette in the middle of DC surrounded by over 15,000 people, no idea what my hotel is called or how to get to a metro with no phone to find Jen. So I wandered and tried to find her. I went to the Nuun booth, the stretching tent, the bag check, the bathroom area, anywhere. Then I gave up. I used 2 different people's phones to call my sister and have her tweet that I was going to find my way back to the hotel. And luckily I did, but of course not before I went missing for two hours. 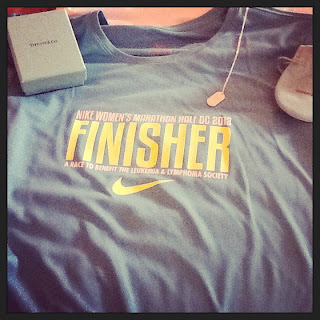 Jen was at the hotel and was (I think) happy to see I made it back. She also got me a cookie from Starbucks which was soo yummy. We got ourselves ready and headed to lunch to meet one of my twitter/PR friends, Kelly. It was great to finally put a face to a twitter handle!

Heading home was long and of course we hit traffic and I got lost going to the midtown tunnel, again. All in all it was a great weekend. Nike has some kinks to work out such as the expo, packet pick up, this girly thing they have going on (I'm super competitive, no need for makeup on a course), the corrals and finishers circle. I can confidently say this was great for my first half and I'm so excited to do it again. I'm also glad I got to spend time with a friend I don't get to see too often.

Did you race this weekend? How did it go?