Wanderlust Yoga In the City 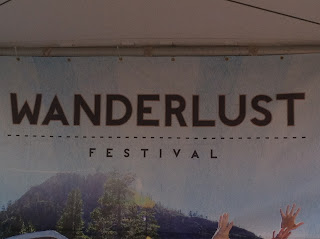 Last weekend (2 weekends ago, I wrote this last week) I was invited to Wanderlust's Yoga In the City event in Hudson River Park by Sweetriot chocolate. Although I had run a mud run the day before (recap to come) I was still pumped up to go and I am so glad I did! 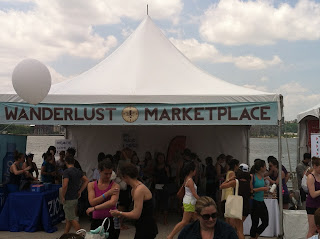 When I get there I checked in at the press tent and walked around the festival before the first class at 1:30 PM. Some of the major sponsors include Health, Avocados Mexico, Lyfe Kitchen, Luna, and Resource Water. Each had booths set up with samples available. I will review sponsors in an upcoming post since there were so many yummy things!

I wanted to take the first class so I headed to the field area in front of the stage area. Kristin McGee came up to kick-off the day and looked adorable with her baby bump. First up was Twee Merrigan of Prana Flow. She also was sporting a baby bump (adding to the baby fever I've had for years). Her series was basic Vinyasa. Lots of sun salutations, down dogs and variations.

To close up the class was Kelly Morris of Conquering Lion Yoga. She is hysterical. She also brought to our attention that us New Yorker's tend to just think of ourselves all the time, and also shop. For her portion, we had to connect with our neighbors and dedicate our practice to them. Me and my neighbor giggled and I told him my biggest problem of the day was it was hot. He didn't tell me anything. We proceeded with our  practice and I did some crow poses although my arms were SO sore from the race. What I really loved was how vulgar she was during class. How often do you find a yoga instructor like that? 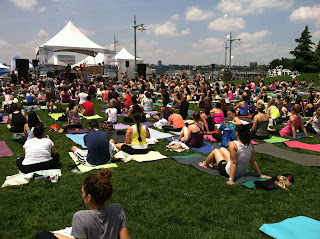 After her class finished I went back over to the sponsors then back to the field. The Acroyoga group was walking through the audience and I stopped them at the end to grab a picture. They were on stage earlier too and I cannot image the stamina and strength it takes to perform those moves. It was incredible.

I watched most of the second class then joined in at the end when it was time to stretch. My body really needed that.

Something that was consistent with each instructor was paying attention to your breath. It was amazing to sample each style of teaching and what each instructor favors. I am so grateful to have been able to practice with such amazing yogis. If you have a chance to go to Yoga in the City in your state I highly recommend it.

Please look out for another post this week or next highlighting the amazing sponsors!

Did you attend the Wanderlust festival? What did you think?

Xo,
Lynette
Posted by Lynette at 7:00 AM No comments:

Some Fall Races and Goals

I have been stressing over picking the perfect half for the fall. Since Jen is already running Chicago I couldn't beg her to run something with me. I wanted to do Rock N Roll Vegas but since I am serious about saving money to move I decided it was an unnecessary expense. Although I am considering Nashville for the spring (the country girl in me won't let that one go so easily).

But let's stay in 2013 for now. For the fall I decided to sign up for the Divas Half Marathon. A major factor was that it is so close to home. I have a friend who ran last year and said she had a blast. It does look a bit girly for me with the tiaras and boas but I suppose I can look beyond that. Because in reality it looks like a lot of fun. My friend said the course is flat and lined with entertainment. I also found out a new friend, Bernadette, is running too.

I'm also setting out to conquer the RUN10FEED10 race again. About 2 weeks before the half I will be running the West Side Highway hopefully on my way to a shiny new 10K PR. But before that I will be hosting a virtual 5K to raise the required amount of money to help provide at least 10 children in my hometown/the US a meal. Look out for announcements in the near future!

Lastly, given that the Fitness Mind Body and Spirit games will be the same weekend as 2012 (weekend before FEED), I will be running 4 miles through Central Park. I really enjoyed this race last year although I wish the festival lasted longer and the lines didn't get closed.

Now, who has some recommendations for races that are not in September? Need to fill the rest of my schedule! 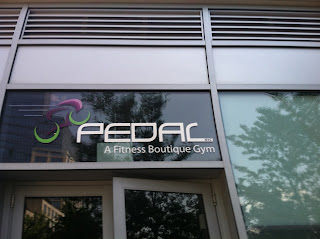 A friend could not take a class at Pedal on Saturday after the Greatist run so she offered it to me. I said yes- I had never been there before and it sounded fun!

Although I had already ran 4 miles in scorching heat, I think I did well in the class. I did get a little lost on the way there but they had literally just started when I walked in. The receptionist was very nice and rushed me into the spin room where the rest of the small group was.

The class was called 30/30 so that means there was 30 minutes of spin and 30 of TRX. This was my first time with TRX. 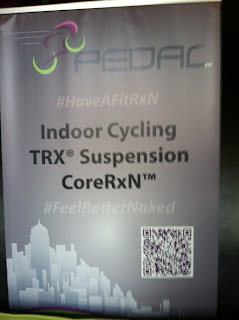 In the spin room Mr. Ray was getting everyone pumped up. I settled in to my bike and we got going. The class was filled with sprints, hill climbs and jumps. Tons of muscle confusion! The music was loud and I could sing along to it (if I wanted to, not that I did). The only thing I disliked was he kept lowering it just when I was getting into it.

Phew that made me tired just writing! We ended the class outside with a little run however I opted for squats since I was SO dead from the class and morning run.

If you have never taken this class I suggest you get your butt to Pedal NYC very quickly! I liked the 30/30 method- cardio and strength training! Mr. Ray was great. He offered modifier if you could not do something and he motivated everyone throughout the hour.

Also, thanks to Talia for setting up the class!

Have you ever been to Pedal? What did you think?

Thursday Three: Another Weekend of Workout!

What are my plans this weekend? Workouts! I am seriously not trying to make this a habit- it just happens! Here is what I'm accomplishing:

What fitness activities do you have planned this weekend?

Xo,
Lynette
Posted by Lynette at 7:00 AM No comments:

Last month the Sports Authority sent me some snazzy headbands from Under Armour. I sort of lack photos of them being cute in the package but I have some of them on my head.

I got two different sets- 1 pack was patterned and the other braided. I have to admit, although I like both, the braided ones are my favorite.

The first time I wore one was for a shake out run when I was in DC. I wore the pink patterned one. It stayed on my head great and kept the hair out of my face. And it sort of went with my outfit. 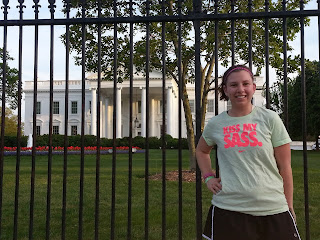 A couple of days ago I wore the black braided one for the #WeRunNYC run. Actually, I took it off beforehand because it was bothering the clips in my hair but that is besides the fact. It looked great in my hair and kept all my little flyaway's nice and secure. 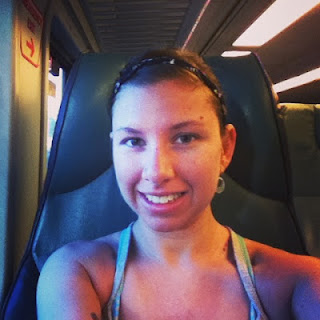 What I really loved was the elasticity. Most running headbands I have slide off halfway into my run but both of these Under Armour headbands from Sports Authority stayed in place which was reassuring. I look forward to wearing one this weekend during my mud run!

What headbands do you wear when running? Have you ever used Under Armour's?

On Saturday I woke up bright and early to attend a fun run I signed up for. I had found out about the run though Jocelyn on Twitter and decided to sign up. It was hosted by Greatist and included sponsors Nuun, Picky Bars and Oiselle. The #WeRunNYC run also had a 4 or 8 mile option- I chose the 4 due to lack of training this May.

I arrived at 8 and got my name tag and put my bag in baggage check. I went around to the tables to get more information and test out samples.

My favorite Nuun flavor right now is lemon-lime and I was SO happy that was one of the flavors being sampled. It was perfect pre-run and much needed post-run with the heat. 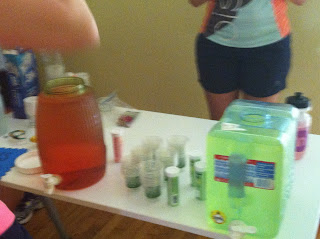 I also got to try Picky Bars for the first time. I only tried one flavor, the peanut butter ones. I'm a bit picky (no pun intended!) with protein/power bars and these were not my favorite. But I didn't hate it! They were just a bit different. 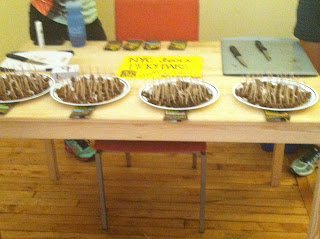 Oiselle had a table set up with coupons which I took one of. Jen had mentioned how much she loves their shorts so I may need to give them a try! 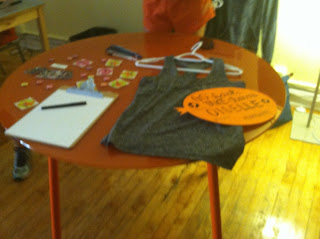 We headed out for the run after everyone arrived. Most people had chosen the 4 miles due to the BRUTAL heat. For the first half I stuck with Jen and Julianne however due to how out of shape I was I fell back about half way through. Then caught up and fell back again! I came back last but I do not care. I finished and am so ready to get back into running. The little break I had was a nice refresher.

After the run the ladies from Oiselle picked raffle tickets I headed out to Astoria before my second workout, which you can read about in a review this week!

It was so amazing meeting all the inspiring and amazing women I follow up Twitter in person and being able to run with them. It was a great experience and I look forward to doing it again. 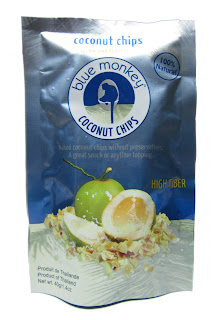 Last week I was obnoxiously hungry at work so I decided to finally test out my Blue Monkey Coconut Chips that I received over a month ago. I have to admit, the reason I was waiting so long is because I was a little scared of what they would taste like. I love coconut water but am not always open to trying new coconut flavored things- mainly because they disappoint.

Since that was the last snack I had for the day- they had to suffice. And fortunately, they were great! I do wish they were a bit more chip like, ie. bigger and crunchier, but other than that they were great.

The coconut taste is not too strong and it's not "pulp like." They pieces were a bit tiny but there were a lot. Definitely more than a serving so I saved some for later. The Blue Monkey chips were like hydration in a snack! 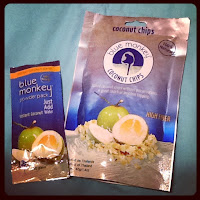 The chips are a great source of heart-healthy fiber, 100% natural, baked free of preservatives, and lightly sweetened with coconut nectar sugar and non-GMO cane sugar.

If you enjoy coconut and are looking for a crunch you have found your match. I highly recommend checking out the Blue Monkey Coconut product line.

Have you tried this brand? What did you think?