I Tried It: Indo Yoga Board


It's officially November! I really love that it finally feels like fall even I'm constantly freezing. Anyway. Last week I was invited to try out a new trend, yoga on an Indo Board. Huh, you ask? 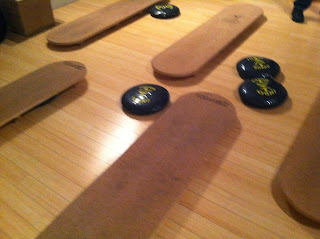 The Indo Board is a balance trainer created by Hunter Joslin. Originally, he designed it to train surfers out of the water but eventually realized the board could be used for so much more. With clients reporting an increase of leg and ab strength, Joslin explored how to incorporate difference activities with the Indo Board.

In 2013, Indo Board collaborated with YogaFit (the world's largest training school) to introduce the Indo Yoga Board. The concept was inspired by SUP Yoga, which I still need to try one day. It allowed those serious about SUP to train during the colder months and those who have no access to bodies of water to experience a paddle-board type of workout. 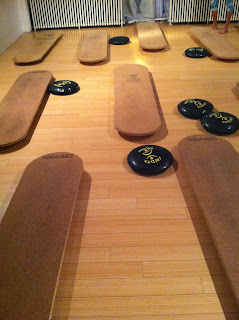 Dawn Ehman, owner of YogaVibez in Ocean City, Maryland, taught our class last week. There were only a few people in the 7 PM class which was nice, because as me and another girl said, more space for when we fall.

Dawn and Hunter went over some information about the board (what I mentioned above) and said we would be doing a normal yoga flow class. Before starting we played around on the Indo Boards to get used to being unbalanced.

For those who have taken SurfSet classes, this board is milder and easier to keep your balance. To make it harder, you can put blow up pillows underneath, but you will never be able to stabilize yourself. 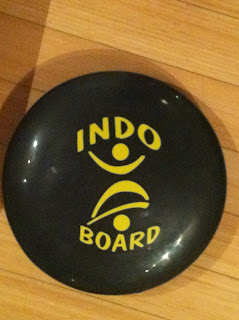 The first couple of moves were easy (we were sitting on the board for a little doing cat/cows, etc). Then Dawn began sun salutations. Down dog is so different when you are NOT stable! As I was getting the hang of the flow, she sped up.

We did all three warriors on the board too. It definitely takes good concentration to do Warrior Three when you have to focus on balancing on a board and staring at the wall. Tree pose wasn't too hard though. For crow, we had 2 options. You could have your hands on the ground or on the board. I chose the ground because I did NOT want to cause a scene. In reality, I really only almost fell once during the class. 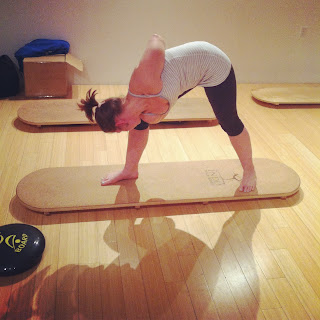 One of the last poses we did was a full wheel (bridge). Unlike during a regular yoga class, you cannot hesitate to push up or you will lose your balance. Dawn came around and helped us all up so there were no injuries.

Afterwards, Hunter came back in and we asked some questions. We even put the pillows under our boards to see what it felt like. Dawn said she has only had about 3 people do a whole entire class like that. When you are just using the board, you can usually stabilize yourself on the rockers but not when the pillows are there.

If you want to practice Indo Yoga Board at home, you are able to purchase a one for about $300. All of the ones released in 2014 will be made with cork to reduce slipping and sliding.

If you have the opportunity to take one of these classes I highly recommend it. You work all sorts of different muscles when trying to keep your balance and perform the yoga poses. Your butt and back will feel it after!

Have you ever taken an Indo Yoga Board class? What did you think?

Xo,
Lynette
Posted by Lynette at 7:00 AM