The Staten Island Half Marathon

I've been talking about this race for months at this point. All I wanted was to redeem myself from the awful spring season I had. Fortunately the race went as good as it could go. The last 2 weeks of training were basically non-existent so that's all on me. 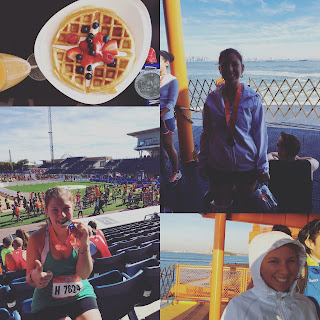 I woke up feeling pretty good and got myself ready. I used a new tape by Performance Health (I know, I know, don't try anything new on race day) and I ended up being really impressed with it. It stayed on for the entire race. My usual tape doesn't last past my front door. Now for more color and pattern options for us injured runners! 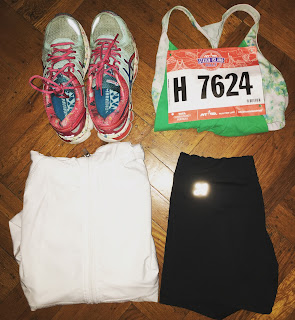 I tried to find Brock and Amanda before we got on the ferry and after we got off but it was a lost cause. I was so happy I booked it to the bathroom on the ferry and got to skip the porta potties. I was second on line! When we got to SI I got myself prepared and checked my bag. It was 10x warmer this year than last so I wasn't shivering to death in the corral and was able to feel my legs.

I wasn't running with my watch and after a successful Bronx 10-miler I decided to also forgo the music! The first mile was, as usual, short because of all of the people. During the second mile I put my headphones in for less than a minute to push me up a hill and drank Gatorade at the aid station. At mile 3 I got to eat (vanilla gu!). That was also when I told myself that all I had left was the exact race I ran 2 weeks prior.

Miles 4-6 felt decent. I deff felt like I needed a little push. Before mile 6 the 2-hour pacer passed me and of course I tried to keep up. When I made my goals in Jan, I had 3 spring races to sub-2 in and this was a backup. Of course I can't help an injury but it still crushed my soul when I had to drop back. I kept telling myself the rest of the race to run my own race and kill it at the NYC Half in March. 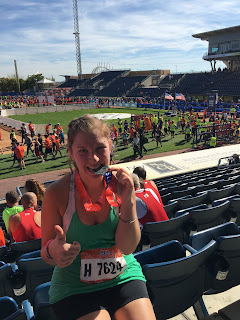 After the 10K mark, we were up on the boardwalk! This was a new part of the course and it was nice to have a change of scenery. I thought about stopping at a real bathroom 479428 times then decided I was less than halfway to the finish line and that would be silly. Same as last year, I had trouble finding miles 8 & 9 but the difference was I didn't get into a fog. Maybe it was no headphones, maybe I was just prepared.

NYRR gave us a nice surprise before mile 10- an obnoxious set of hills! Judging by the splits on my NYRR account, that is where I slowed wayyy down. I really thought I was going faster.

After that, it was basically downhill for the home stretch. We took a little detour by the water then ran into the ballpark. 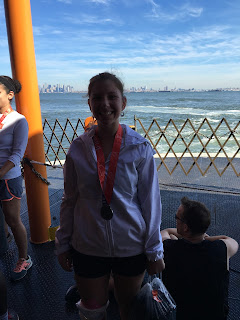 Overall? I ran a good race. I never stopped, I listened to my body (knee, calf and hamstring pain- woo hoo!) and did my thing. The 2:07 was a little discouraging and I thought I was going to do better. It's nowhere near my PR and after last season, I thought I was stronger. Oh well!

After I got all iced up at the med tent, I got my bag and met up with Brock, Amanda and their friend Ash and we headed back to the city. 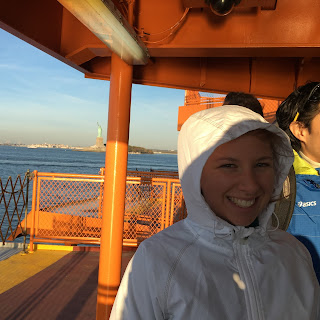 The ferry was super windy there and back, and cold, so I'm so happy Charles River Apparel reached out with one of their new jackets. The Latitude Jacket is wind proof and water proof and defiantly kept me nice and warm. It didn't stick to me when I was sweaty after the race and I have worn it to work and on the weekends as a light jacket. You can purchase on Amazon for $58.89.

Congrats to everyone who ran Staten Island and good luck to those taking on New York next week!

Happy Thursday! We're so close to Friday which means it's almost Staten Island Half time! 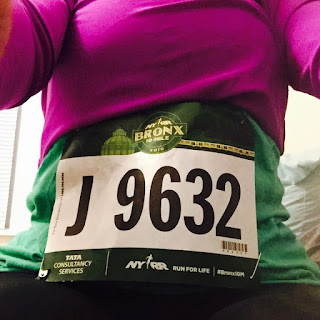 2 weekends ago, after I saw the Pope, slept for 12 hours and ventured to Brooklyn for a housewarming party, I ran the Bronx 10-miler. This race fell at the perfect time as this weekend was my schedule 10 miles for half marathon training. This was supposed to be a training run and I accidentally started racing. Whoops. 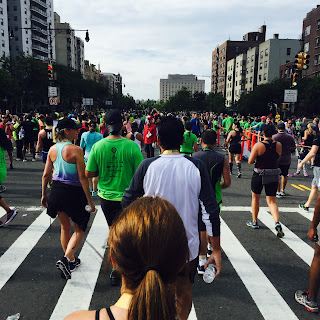 I got there about 45 minutes before the start and was freezing (shocker) so I curled up on a bench for a little to get warm. By the time I got there Brock was already making his way to his 5K start line so I didn't get to see him beforehand. I lined up on my start line and after I passed all the bathrooms realized I had to pee. Tough luck for me.

When the gun went off my music decided to stop working so not only did I have a knee injury, I also had no headphones and still had to pee. The first few miles went by quickly. A lot of rolling hills and a little pack to stay with. I eventually stopped at mile 3 to use the bathroom. I'm not sure how much that slowed my time down but I hope not much.

Miles 4.5 and 6 were loopy and were over before I knew it. Although mile 6 was pretty rough for me. Once I was up the hill on onto the second part of the out and back I knew I could finish strong. My knee was bothering me, along with my hamstring now, but it subsided and I felt super strong.

There were definitely some moments where I wished I had my music, especially pushing through the end, but I managed to finish my reminding myself that I had 1 more eat, 2 more drinks then a mile to the end. 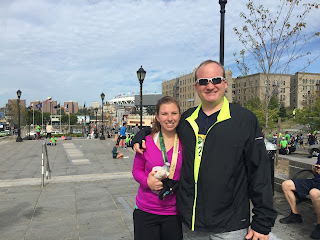 While I didn't get a fast time, 1:35 and change, I was surprised at the pace. I didn't have my watch so I was guessing the entire time. I feel like I could redeem myself this weekend however workouts haven't been going wonderful. I went to yoga yesterday at Clay and tomorrow is one last speed workout at Mile High Run Club. 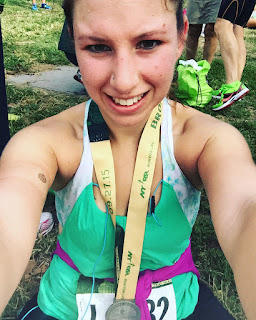 Anyone else running this weekend?

Cheers to strong and speedy legs!

Xo
Lynette
Posted by Lynette at 7:26 AM 4 comments: