After a not-so-wonderful Saturday night, I spent all of Sunday sleeping, woke up to get some work done, then went back to sleep. I felt pretty crappy- physically and emotionally. Even though it's been a few years since I lost the weight I put on those last two years in college, I still haven't quite figured out that certain drinks can and will effect me differently now.

After basically embarrassing myself (and countless others), I woke up Monday and realized nights like that are like not-so-great training runs. They will not ruin your life, just like a bad training run will not destroy your race.

One of the great things about running is the lessons you learn that can be applicable to other parts of your life.


Running teaches you to keep going even when things get hard and you feel like you're going to go down.

That hard work and determination will reward you.

To look forward instead of looking behind you, because then you will go down.

That one rough training session is not going to make or break the end result.


So the next time you want to go into hiding, remember that you bounced back from that awful run and you'll eventually get over it all.

Xo,
Lynette
Posted by Lynette at 9:52 AM No comments:

Most of you know from my previous posts that I have been nursing a hamstring injury since September and a knee injury since last February. After I completed by 9+1 for guaranteed entry into the 2016 NYC Marathon, I took exactly 2 months off of running and boy did it take a toll on my body. It was the first time I realized how much running played in my physical and emotional health.

I'm happy to report that although I was under-trained, I started and finished the NYC Half Marathon 2 weeks ago! It was no easy feat but I ran one of the smartest races I have ever run. 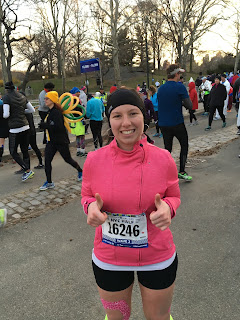 With my hamstring acting up leading up to the race, I didn't make the fact that I was running public knowledge because I didn't know if I was going to be able to finish. The two weekends prior to the race I was also getting certified in Pilates (more on that soon!) so I wasn't able to run.

During my last Mile High Run Club Dash28 class, I asked Andia if she had any tips for the hills that were going to tear my hamstring up and she told me to run on my toes, lean a little forward and pretend I was climbing stairs.

So off I went on the morning of March 20 to a freezing Central Park. Knowing if I wore gloves during the race my hands would get to hot, and not having any throwaway options, I checked mine and think I got a little frostbite. Bare hands paired with bare legs = no bueno. I went to find Brock and we headed over to the corrals.

I already knew I'd be running slower than what NYRR thought I might run so I went to the last corral in the second wave.

We were finally off about 20 minutes later (at this point my entire body was numb)! The first thing I had to conquer was cat hill, which was easy. While we were on the east side next to the reservoir,  a runner was yelling about bananas and completed crashed into the orange cone and wiped out (she was OK!). Don't yell and not pay attention to where you're going when you're running. The rolling hills going into Harlem felt a little tricky and by the time we got up to the roundabout before Harlem Hill, I began to feel my hamstring, yay. I ran very slow during the roundabout and also screwed up my fuel over here. I refused to eat until I went up the hill except I usually take fuel at mile 3. Oops.

Harlem Hill was hard. I took it slow and made it to the top and I was the happiest injured runner ever. I knew that if I got over that one, the rest of the rolling hills would be fine. And they were!

Once we started getting closer to the CNN building I got more excited because I knew once I stepped foot out of the park, it was pretty much a flat road to the end.

Running through Times Square will always be magical. It's only one of two times they shut the street down each year. Between the lights and the crowds, it's an easy mile to get through. And for me, right before I made the right onto 42nd St., my friends were at the end of it! Anna, Lauren and Erin came out to cheer for me, Lauren's boyfriend, Brock and the rest of their Team for Kids team. I tossed Anna my ear warmers (I got hot) and went on my way.

Everyone I talked to said they didn't like the West Side Highway because it was so boring. As an injured runner, I felt the opposite. I LOVED it. There were no hills, there were crowds and most of all, I could just run without fearing an extra challenge.

I saw the girls again right before the Battery Park tunnel. Again, for the second time, I took the tunnel too fast thinking I had more energy I'd be able to kick at the end. I was wrong. I almost began hitting a wall at mile 12.75 and just wanted the race to be over. 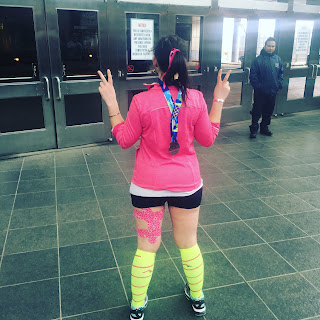 As soon as I saw the left turn into the chute I booked and crossed the finish line. Since I was channeling my inner Shalane by running in my compression socks, it was only fitting that I also almost collapsed at the finish line due to jello-y legs. A volunteer got a little scared that he might have to catch me but I regained my balance, got my medal, found my friends then inhaled a pizza. 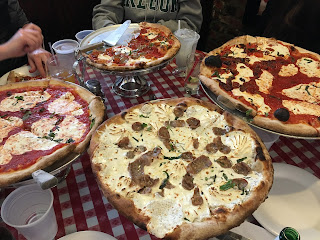 Between my body knowing how to run this distance, a lot of Pilates and running smart, I learned a lot leading up to and during this race.

Next up: a destination race in Virginia wine country the first weekend in June which takes us right into marathon training. I'm excited that one of the woman who stays in the same Hampton's sharehouse as me and is a marathon runner is going to share her tips and tricks with me. She already said I had to start swimming for my injuries- boo.

Congrats to all of the NYC Half finishers!

Xo,
Lynette
Posted by Lynette at 5:30 AM No comments: