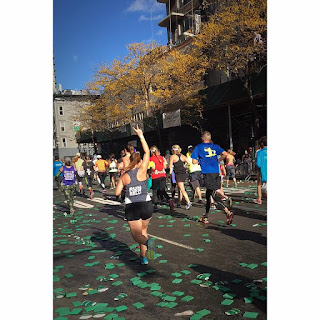 I ran the NYC Marathon well over one month ago. Yes, this post is extremely delayed but I had trouble coming up with the words to write it. I had the time of my life but the feeling of euphoria didn't last long. My friends are still telling me how proud they are of me and are trying to make me see what a big deal running 26.2 miles is. 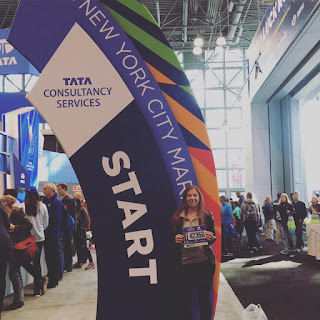 Whether it's because the one person I really wanted to be there never came or because someone I didn't want there invited them-self, I haven't been able to bring myself to write this post. But I finally wrote and it was pretty euphoric reliving that experience again.

I'm going to spare you the details of the day before, because friends who don't run marathons were begging me to get excited. God bless the girls who got me through that day in one piece. 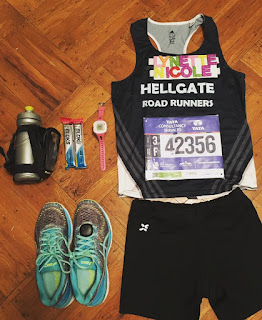 I woke up really early on Sunday and put some pump-me-up music on, ate my bagel, drank my water and got dressed. I had throw away sweats I wore but it was so warm, I had my jacket open. After taking the train to the Staten Island Ferry, I boarded the 7:30 AM. The ride was relaxing. I had my headphones in and my phone plugged into a portable charger . 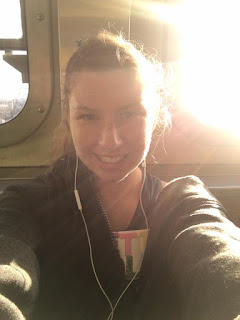 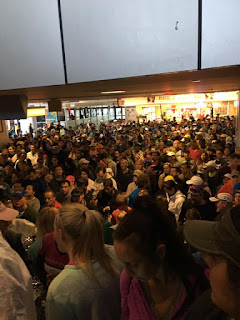 Waiting to get on a bus took forever but nothing compared to the bus ride there. When I run this again, I will be taking the 5:30 AM bus directly to Fort Wadsworth. I will say that I was fortunate enough to get a seat on the bus. Once we arrived at the start village I had practically less than 15 minutes to find a bathroom, get rid of the plastic bag and get ready to run. Not ideal in my opinion. I felt so rushed!

Less than 10 minutes after I got in my corral, we started moving towards the top of the Verrazano bridge. What a cool experience! Shortly after, the cannon went off for my wave and New York, New York, blared through the speakers. 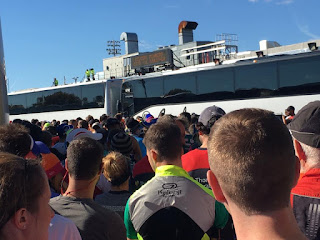 I took the two miles on the bridge to really take in the view and what I was about to do. I felt abnormally relaxed so that obviously was not a good sign. And of course that downhill did me no favors and I lost my race at mile 2.

Brooklyn was by far my favorite borough. The energy, the people, the banana, everything. I was excited to give people high-fives but my hand started hurting after a few so I had to stop. Right before the mile 4 marker I stopped to pee at a hidden porta potty. I was still drinking water when I arrived at the start line and had a feeling that would happen. Fortunately there were only 2 people in front of me so it was a quick stop.

Even though I was taking my chews and had two bagels earlier, by mile 9 I was starving, clearly not good. I took a chew and at mile 11 ended up literally cutting off a shit ton of runners to snatch a banana out of a spectators hand (don't worry, they were meant for the runners). I slowly ate the entire thing and finished it just before the halfway mark. 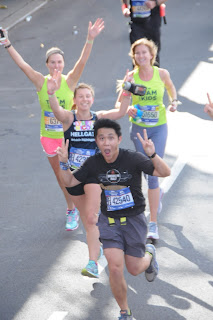 As I got closer to the 13.1 mile marker, I started to realize the toll my legs were taking- the Pulaski bridge is barely an incline and I definitely huffed and puffed my way across it. I was so excited to get into my borough! It was also going to be the first time I saw some of my people.

I ended up connecting with a woman I met at the start line. We found each other a few times and Queens was the last time I saw her. I slowed down a little after mile 14 because I didn't want to miss my Hellgate team or my dad who was with my aunt, uncle and cousin. For some reason I didn't see my team until someone yelled right after I passed them. My dad was up at the front and I jumped into his arms (I literally jumped on all of my people) and went on my merry way. He told me later he wished I would have stopped for a picture, I said I was kind of in the middle of something. 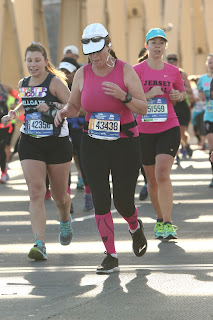 Next was the bridge with the highest elevation of the entire race- the Queensboro. I ended up flying over that one because I ran that bridge on a weekly basis. The only shitty thing about that bridge was my GPS lost its signal and I never got it back. Let me tell you, doing math for 10 miles after running 16 doesn't work that well.

I was completely underwhelmed coming off of the bridge and going up First Ave. I was really expecting more noise and people. However, I did have 3 sets of people I got to see! First I saw Claire, who I didn't know was going to be watching, then was my mom with Tasch, Wendy and my sister, and last was my ride or die Anna with Chris and Meghan. Again, I jumped into everyone's arms, thankfully not knocking anyone over. 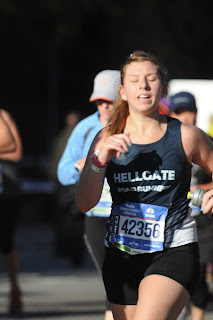 Once I got to mile 19, I really started feeling the effects of the race. As during my training, my hydration wasn't holding so I grabbed some water from a spectator. I made it over the Willis Ave bridge and to mile 21.5 and took a minor walk break. I did that a few times until mile 25 but judging by my time, I was only doing it for a few seconds at a time even though it felt longer. My mind was so clear so I think that's why the pain was so apparent to me. I actually think if I was delirious I would have just ran through like I do when I sometimes get delirious at the end of a hard half marathon.

I will say, the Bronx was pretty poppin'. I was told it was going to be quiet so I was pleasantly surprised

Mile 25-26.2 was so magical. When I got to Central Park South, both of my parents were there (on opposite sides of the street because why make my life easy?) and my friend Jaclyn was there! She was the last person I saw before I went into the park and I was so happy I got to see her. 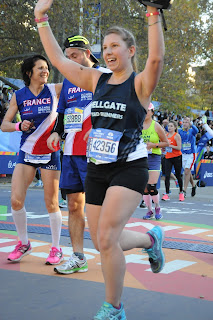 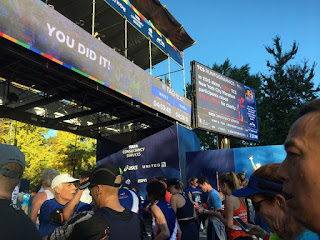 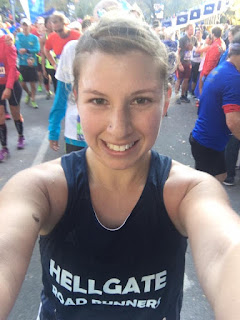 After that it was a right into the park and there it was, the NYC Marathon finish line. The best piece of advice I got was to screw stopping your watch and put your hands up for that picture. Fortunately since my watch lost GPS, it didn't matter! I crossed the line with my hands up and the biggest smile on my face. I literally had no idea what my time was and when I finally saw they had the clocks going, I was a little disappointed. But then I turned by phone on and checked the app and saw I met my goal!!!!! 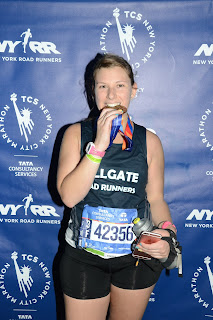 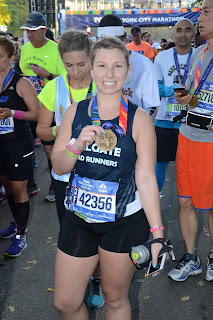 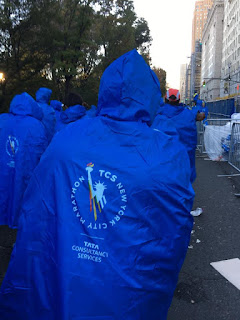 All I wanted to do while going through the finish line shoot was sit down but I also really wanted to get my poncho and be ready to go to the bar before I did that. Once the long waddle was over, I sat down on the sidewalk to stretch my legs out before ordering a very expensive Uber,

I spent the rest of the night celebrating with family and friends. I somehow managed to stay out until 11:30 PM! 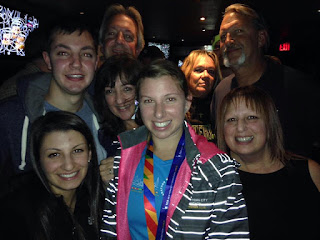 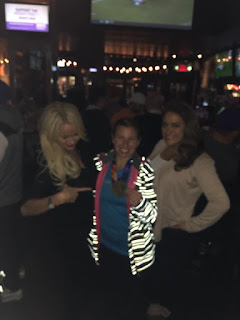 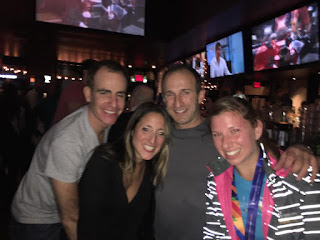 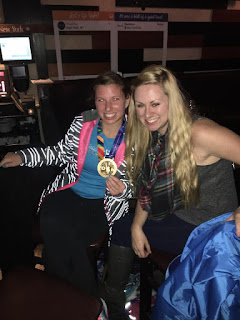 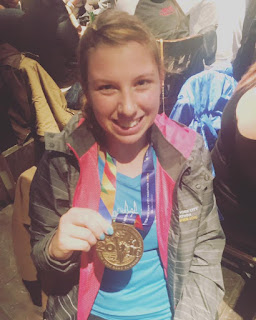 Running the NYC Marathon was the most amazing experience. The question I've been getting a lot is if I'm doing another one. I am. When, I'm not sure. I'm a summer girl so training for a fall race took away a lot of my spontaneity during the summer but it's too cold for me during the winter to train for a spring race. But I'm looking forward to a sweet PR (and running a much flatter course). 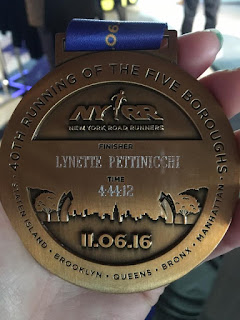 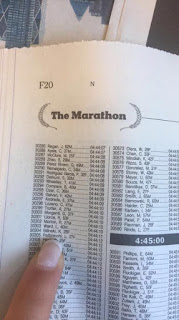 Thanks again to everyone who cheered and partied with me, and didn't judge me for sleeping all day on most Saturday's after my long runs so I could go out that night.

Xo
Lynette
Posted by Lynette at 6:00 AM