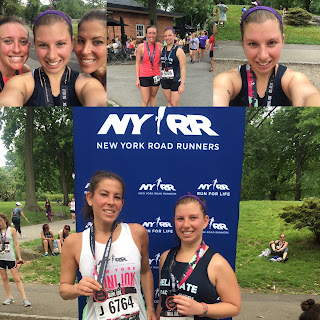 After a rough week- emotionally and physically- I woke up bright and early Saturday morning for the Mini 10K in Central Park. In true Lynette fashion, I was super early and none of my friends were there when I arrived.

I hung out around bag check for little since I didn't want to put my phone away just yet. My coach and a few teammates showed up so I hung out with them for a little, then my friend Wendy arrived (who was running her first 10K!) and we took some photos and checked our bags. 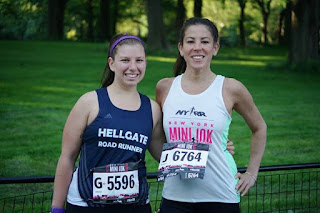 After we had all of our stuff put away, we headed to the start line which was of course 15 min away. I got corral G, because NYRR was going off of my pre-inury pace. Just before we started moving my teammate Denise appeared in my corral and we decided to run together (AKA she was going to pace me). We began running and had to weave in and out a lot on the Central Park West. There were a lot of walkers before we even hit the one mile mark which made it difficult to find our groove.

We were running at around a 9:15 pace. We skipped the first water station and thought there would be one at mile 2 but there wasn't. We booked it up our first hill and embraced going down Harlem Hill and not up it. Finally we saw the second water station and I grabbed some water to sip and tossed the rest over my head. One of the biggest reasons why I checked my phone- this race is ALWAYS hot and sometimes humid- so I knew I'd want to cool myself down.

Just after that was the 5K mark which I was surprised that we clocked a slow time for- 29:06. Next up were some rolling hills on the east side of CP. According to my watch, my 4th mile was my slowest, I fell back about 10 seconds.

At this point it was definitely hot and I was definitely breathing heavy but I knew that if I kept it up, I would be content with my time and the effort I put into the race. It was exactly what I needed after the prior week. At this point, with only two miles left, I knew I had it in the bag. I lost Denise just before the next water station where I grabbed water for my head and Gatorade to drink.

Mile 5 clocked in at around a 8:37. My watch was off by about 10-13 seconds according to official times. This mile included flying down Cat Hill. 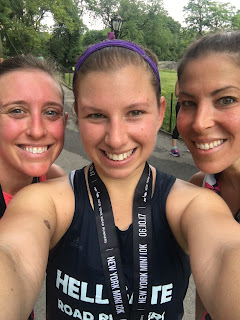 Once I was down Cat, I knew it was over. I rounded the bend to Central Park South and saw one of my Hellgate teammates walking and grabbed her. But accidentally also left her so safe to say, I am not a good pacer. I was excited to see the 800K mark because that meant only 2 laps of the track left.

My Hellgate team was cheering at the mile 6 marker which was just enough motivation for me to push through to the finish line. 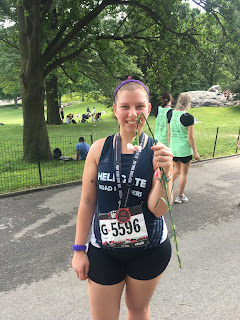 I finished in 57:42, and although that's not much, it was a minute away from my PR and my first solid race in over two years since I got injured! My average pace was 9:18. 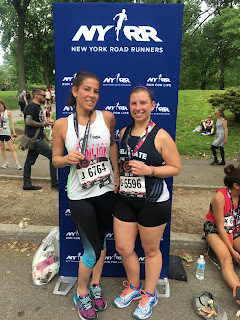 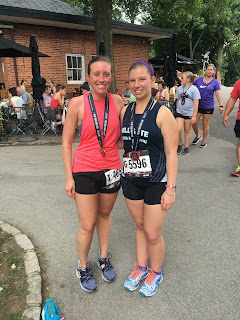 All in all, I felt great the entire race. I'm so thankful to have been able to start with Denise who got me off to a great start. I'm excited to train through the summer and get that overdue half marathon PR in October!