Why Is Someone’s Misery the Source of Your Comedy?

I'm still in the portion of book writing where I am just putting everything down before editing. Though I try to revise as I go, same as with writing a press release, it's better to get it all down then read it again later with fresh eyes. And of course, have someone else do the same to catch the little things you missed.

Two weekends ago I finished another chapter and started the next, which is when the title of this post appeared on my page (by appeared I mean I wrote it when I was on a roll and my fingers were just going): Why Is Someone’s Misery the Source of Your Comedy?

Though the darker chapters in Life's Better In Yoga Pants are still written in a comedic way, the same way I speak in person or write on this blog, they are my experiences that I am rehashing with a little humor. I'm turning my own pain into something a little funnier that's more relatable when you read it. Because it's a book for the public. Nothing about this is funny when it's just me and my closest friends.


As for my everyday life, when you've already won, got what you wanted, watched someone's life get destroyed, know that I am traumatized, why would someone (or their friends, I give benefits of doubts) make my sadness their personal comedy show? Isn't what you have satisfying enough? Do you both have cocktails while pressing play on the "Haha Cheers to Destroying Her Life" show and giving yourselves a little evening chuckle?

On top of that, being in quarantine like the rest of the world, I'm not doing anything too interesting.

Except for writing my book. Which I suppose is pretty cool. I've also made a lot of yummy things. Have been crushing my runs (fingers crossed we can self-seed at some post-corona races). Practicing to record few instrumental and instrument/vocal songs. And making sure I speak with my therapist as regularly as my finances allow.


So yea, on that front, on the exterior, my life looks great. Except we all know that's not true in real life.

We know that a smile and "I'm Fine" can fool a lot of people for a really long time.

Fuck, I even fooled myself a few times. 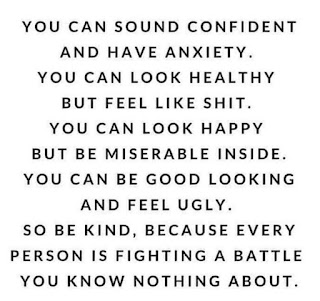 But whether it's a group of people, two people or one person, whoever it is, knowing they think what I had to go through, what someone did to me intentionally, the trauma, all of it, is funny? That's almost just as painful and that's not fair. The damage was done, the steak knife is in and there's no reason to include a butter knife too.

Be and feel lucky to cherish what you got, have, whatever verbiage makes sense here, and let me figure out how to survive this without being entertainment.